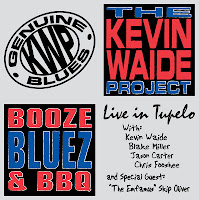 "Booze, Bluez, & BBQ: Live In Tupelo" was recorded live at the 41st Annual Tupelo Hog Roast on May 18, 2013 by Jim Staten and Q-Now Audio and Mobile Recordings. Featuring Chris "The Immortal SuperFoosh" Fooshee on drums and debuting newcomer Blake Miller on bass, with a special guest appearance by "The Emfamus" Skip Oliver on harp, the Project winds down the blues highway with nine tracks comprised of new songs as well as your favorites from the debut album "Lost In Mississippi." The album  finishes off with three new studio tracks, adding Jason Carter on lead and slide guitar to the mix, for a total of twelve tracks.

Album release scheduled to coincide with Kevin's 41st Birthday Bash at Woody's Tupelo Steakhouse in Tupelo, MS, on Friday, August 16, 2013. More details about the Release Party/Birthday Bash will be announced in the coming weeks.

Pre-order phase for "Booze, Bluez, & BBQ: Live In Tupelo" will begin Tuesday, July 16, 2013 at kevinwaide.bandcamp.com and will run through midnight Monday, August 12. All pre-orders will also receive 2 free passes to the Release Party/Birthday Bash show at Woody's on August 16.

The Kevin Waide Project is the brainchild of Kevin Waide and Chris Fooshee and celebrates 6+ years of "preachin' the blues!"
Posted by Unknown at 10:20 AM