Pros and Cons of Being a Professional Musician

Recently I was afforded the opportunity of becoming a "Full-Time Musician" (read Unemployed), and I have been weighing the pros and cons of my decision over the last few months. While there are some glaringly obvious pros (sleeping in, not having to punch a clock, etc.) and cons (financial instability!), I'm finding lots of other little details that used to go unnoticed, by me anyway.

Pros
Cons
Half full or half empty? I don't really know. Perception is the key, I guess. For the moment, I'm still focusing on the pros of being "full-time."

What do you call a guitar player without a girlfriend? Homeless. :-)
Posted by Kevin Waide at 11:46 PM No comments:

To everyone who downloaded "Lost In Mississippi"

What do you think of the album. I would love your feedback, what you like, what you didn't care as much for, what you would like to see on the new album. Leave a comment below telling me exactly what you think. Yes, I said that out loud.

For those who haven't purchased the album yet, what are you waiting for?
Posted by Kevin Waide at 12:30 PM No comments:

As you've probably noticed, I've been quite busy today uploading audio and video from the weekend at Vanelli's. My youngest son took the video on his iPod Touch and didn't think to set the orientation right, but he did manage to get decent sound. The two songs are songs off the Album-in-the-Works. It's too early in the game to name the album, so from this moment on, I will refer to it as New Album (cleaver, huh?).

I also uploaded a couple of rough mixes from the recording session last week. These songs, "Call My Name" and "Hypnotized," foretell the direction this album is headed in. I'm really excited to get this album underway. Not sure how it's going to turn out, but it's going to be me, no matter what.

Please take a little time and give them a listen as I'm anxious to hear your opinions. Leave comments below telling me what you like/don't like about them and help me record an album that you want.

Later!
Kevin
Posted by Kevin Waide at 7:54 PM No comments:

Quiet in the studio

Foosh, Jay, Jason, and I are headed into Double Wide Studio today to start recording for the new album. I'll be sure to post some snippets in the days to come as we get things closer to finished. I'm really excited to record some of these new songs. All of these were written while I lived on Madison St. downtown and they mean a lot to me. I hope you like them.
Posted by Kevin Waide at 11:10 AM No comments:

I'm pleased to announce that the mobile app for Android is now here! Follow THIS LINK to download it to your android phone.This free Mobile App lets you listen to music, check out photos and videos, read blog posts and get exclusive push notifications straight to your Android phone. Check it out and let me know what you think.
Oh, and for the iPhone users (like me), it costs $299.99 a year to have an app in the iTunes app store, so it may be a while before I can have it placed.
Posted by Kevin Waide at 10:47 AM No comments:

Compliment your lady! Let her know you think she has beautiful eyes. Tell her how her smile makes you melt. Women will tell you they don't want to hear these thing, but don't believe them. Any compliment is a good compliment, and the more you give them, the better things are for you. Just make sure you MEAN IT! Don't offer an empty compliment, as she will see right through it.
Posted by Kevin Waide at 12:55 AM No comments:

Be on time! Traffic and other distractions must be taken into account and planned for, but don't be early, either. A maximum of five minutes early is acceptable. Any more and you come off as desperate. Any later and she may not even answer the door, if she's even there. There are others who want her attention, too.
Posted by Kevin Waide at 12:39 PM No comments:

Never rush a lady. This seems like an obvious one, but you might be surprised at how our actions alone work to rush them. Stop looking at your watch and relax. You'll have a much better evening when she's happy with the way she looks.
Posted by Kevin Waide at 11:57 AM No comments:

A woman is never in your way. Never let her think she is.
Posted by Kevin Waide at 12:31 PM No comments:

(This tip courtesy of the Immortal SuperFoosh) Spectacles, Testicles, Wallet! In other words, always be prepared.
Posted by Kevin Waide at 9:56 PM No comments:

What an incredible night at Romie's Barbecue! Everyone definitely came to party, and the party was good. Special thanks to Michael Brose for laying down the groove on the Bass guitar and Brock Robbins for sitting in on drums for "Voodoo Child". You guys ROCK! Foosh and Carter were in rare form, as well, and the whole night was just magical. The plan was to record the evening, but due to technical difficulties beyond my knowledge of expertise, it wasn't to be, and I'm a little bummed that unless you were there you'll never know what it was. But enough rambling.

I've been writing a lot over the last two months and have almost a new album on songs. The guys and I are going to get together soon and begin rehearsals to iron out the kinks and get these things recorded. I would love to have an album of new material to release by the end of 2013, and that's the goal I have set for myself. We'll see how it goes.

Hope you all have an happy new year. Luv ya. Mean it. 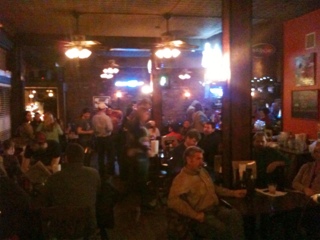 Posted by Kevin Waide at 5:04 AM No comments: