No matter how much preparation you put into an outing, you're NEVER completely prepared.

Saturday, March 23rd, we were scheduled to play at 308 Blues Club and Café in Indianola, MS. We always have a great time at the venue, but we always seem to have some kind of trouble getting to and from the show. Lately, we've taken to getting rooms in Indianola to help with the stress of travel, so I called to reserve rooms at the Economy Inn Express. The person on the other end of the phone didn't speak very good Engrish, but from what I could gather, the hotel didn't make reservations. Not good.

Saturday morning, I stopped by Tupelo Consignment Music to give a guitar lesson before I left town, then on to meet Rick Moreland (Moreland Amps) at his house to load equipment. Foosh and Deb met us there, we loaded the rest of the equipment, and hooked the trailer to Rick's truck for the trip. We were running late, and Rick had a camper shell on his truck (important plot information!), so he loaded the PA in the back while waiting for us to get there. We hit the road around 2:30 pm and feel confident that we've got plenty of time for the drive and to find rooms before the show.

Well, we leave Wren, MS headed to Okolona to get on the Natchez Trace. As soon as we get on the Trace, the wheel bearing in the left wheel of the trailer go out and the wheel comes off! Foosh informs us that he's got a spare hub with bearings in the back of his truck at Moreland's house in Wren, so we leave Rick and Mary with the truck and trailer and head back to Wren (30 mins. away) in the Mustang to get the parts. We also have to make a stop at Scott's Auto Center (local NAPA store in Okolona) to get a punch, Cotter Keys, and wheel bearing grease to make the repairs. We get back to find out the wheel hub had ground away some of the spindle, but not so bad we couldn't get the nut back on (with LOT'S of elbow grease), and we're back on the road at 5:11 pm.

We take the Hwy 82 exit off the Trace and fairly smooth sailing into Winona, where the rain and bad weather met us. We check the trailer wheels just to make sure (everything was fine) and haul @$$ trying to get to town with enough time to find rooms.

About 5 miles east of Greenwood, MS on Hwy 82, the weather got REALLY bad. The wind was whipping us around pretty bad and we were watching the trailer in front of us, when a gust of wind hit both vehicles with enough force to rip the camper shell off Rick's truck, take it 50 feet in the air and toss it like a rag doll across 4 lanes of traffic into a field on the other side of the highway, narrowly missing an eastbound 18-Wheeler! The rain is pounding (remember, PA equipment is in the back of Rick's truck, uncovered now!)  and we're looking for a place to move equipment to the trailer! About 10 miles down the road we find a Convenience Store with a covering large enough for us to move equipment, and we're back on the road again at 7:00 pm. We finally get into Indianola at 7:45, find the hotel, get rooms, and Rick uses a hair dryer to dry the mixer out enough to use for the evening. Tom meets us at the rooms, we get the board loaded back up, and we get to the venue at 8:30.

Setting up the PA, we find out the crossover isn't working correctly, and by this time we're a half hour late starting the show, so we use my small PA for the first set. Rick get's the PA fixed by the second set, and we're back in business. We finish out the night, load the equipment back into the trailer, and retire to the rooms for the evening. The only troubles we had on the way home was finding a place to eat (why is Lost Pizza in Indianola closed on Sundays?) and a blown fuse for the brake lights on Rick's truck (which we get fixed in Carrollton).

All in all, we had a "fun" trip. I used quotes on the word fun simply because we chose to laugh at everything that was thrown at us instead of letting it bring us down (we had other factors to bring us down, but that's the subject of a future blog). It's always an adventure when we go out of town, and we've come to accept (and even embrace) that fact. Thank you to everyone that came out to the show. We also want to thank Mario and Dave at the 308 for having us, and Scott's Auto Center in Okolona for being open late on a Saturday.

One of these days, we're going to figure out how to outrun (or outsmart) those Hellhounds.
Posted by Kevin Waide at 12:12 PM No comments:

I let it slip by without saying much about it, but March 17, 2013 was the sixth anniversary of the Kevin Waide Project's first show at 363 Blues Club in Saltillo, MS. We will be celebrating 6 years of the Project at 308 Blues Club & Café in Indianola, MS this Saturday, March 23, 2013, so if you're in the area, come on out for the celebration. It's at 308 Depot Ave. in Indianola, about half a block from the B.B. King Museum.

On March 10, 2007, I was asked by my good friends Will and Erin Bristow if I could have a band ready for the following Saturday. The club had booked Super Chikan for St. Patrick's Day that year, but his management hadn't confirmed the date-and he was scheduled for some shows in Europe the week before-so they asked me to be on Stand-By, just in case.

I called up my old friend and previous band mate, Chris Fooshee, to see if he would like to do one show, and he said yes. I had also just met Jimmy Karow, a country bass player originally from Kenosha, Wisconsin, and we had been talking music for a few months at the time. When asked if he would be interested in doing a blues gig, his answer was, "Sure, why not." So, now I had a 3 piece band ready to do the show, and I informed Will and Erin that we were on stand by.

Wednesday, March 14, Will called and said Super Chikan's management called and he would not be performing, so if we could do the show, it was ours. I called Jim and Foosh and we scheduled a practice for the following evening. We ran through a few of my originals and a few covers and decided that we were gonna be OK for one show.

I had only been singing for a year or so, and my voice wasn't strong enough to carry an entire evening, so on Saturday morning, I called Skip Oliver and Mark Coward and invited them out to sit in with us, and they both accepted. I now had a 5 piece band willing to play for the evening with no guarantee on pay!

The show that night was a huge success, with attendance breaking fire code! Everything with the guys just clicked, and out of that show, we were asked to play the B-Town BBQ Festival in Baldwyn, MS the following June, and the Okeelala Festival in Baldwyn that October. Shows kept coming up, and Skip, Jim, and Foosh were up for anything as long as we were making money, and the Project was born.

We've had a few lineup changes over the years, with Jason Carter joining the band March 6, 2010 (a year to the day after Foosh's motorcycle wreck), Jimmy going part-time in June, 2010, and Skip leaving to pursue his own career in June, 2011, but we're still going strong. We have a few different bass players at the ready for each show (Tom Sewell, Jay Carroll, Michael Brose, Gavin McGee, Chuck McArthur, Brian West), guitar players (Blayze Windham, Mark Coward), drummers (Elijah Waide, Cameron Kimbrough, Joseph Lackey, Derrick Young), "outside" songwriters (Michael Waide, Helmuth Cote), and a close working relationship with amp guru Rick Moreland of Moreland Amplification. Each year, our gig radius grows. We've had songs played on radio in Europe and played a large number of Blues Festivals around the state. We've gotten to jam with many of our "idols" (Lightnin' Malcolm, Kenny Brown, Richard Johnston, Eden Brent). We've made new friends all over, and are having more fun than we've ever had, and that's because of you guys (and gals).

Thank you all for supporting us, and we look forward to another 6 years, and another 6 years after that. We'll see you on the road.
Posted by Kevin Waide at 1:45 PM No comments:

Side Projects and New Music

For the last few years, I've had the privilege of getting to play music with a good friend of mine, John West. John is a younger guy and the music we play is a lot different than the blues I do with the Project. It's fun stepping outside of the normal and doing something different. Recently, John and I have gotten together with Corey Bell (drums, The Bad Hand) and Gavin McGee (bass, Hobo Hippie) and started rehearsing a full band show. John has a fairly large catalog of original material, and everything is falling into place very quickly. I'm excited for everyone to hear what we've got so far, and I'm looking forward to getting in the studio with these guys.

Here's a little clip of what we've been working on. This is a John West original, entitled "(The Life)...Of A Flower". This was recorded with 2 room mics and isn't the BEST quality, but it's a decent representation of what we're doing. Hope you like it.
Posted by Kevin Waide at 5:50 PM No comments:

Saturday, March 9, 2013, saw the wedding of two of my best friends, Ally and Jason Carter, in a small ceremony at the Elvis Presley Chapel in Tupelo, MS. The reception (and wedding party later that evening) was a "star-studded" event, with long-time friends (and former band mates) jamming into the early hours of Sunday morning. The Immortal SuperFoosh and bassist "Evil" Jimmy Karow came out, as did Brad Bailey (bass) and Riggen Bullard (drums) of the Healers, Vinnie C., and Brian, Ray, and James of the Down South Band, and a good time was had by all.

Saturday marked the first time since October 2010 that all the members of The Healers have been on stage together, and Jimmy's presence marked a(n almost) reunion of the original KWP lineup (Skip Oliver was absent due to surgery two days previous).

Pictured below are the happy couple during their first dance as husband and wife (photo courtesy Gigi Costlow).

We all want to send Jason and Ally much love as they enjoy their honeymoon and wish them safe travels to and from their destination. When you see them out in the next few weeks, be sure to congratulate them. You'll recognize them by the size of the smile on each of their faces.

Thank you, also, to everyone who pitched in and helped make the Wedding Party a success. You know who you all are, and we couldn't have done it without you. 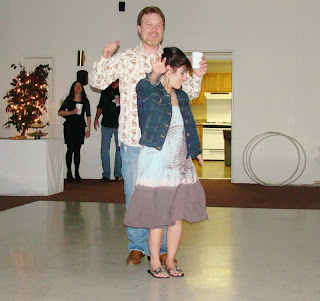 Posted by Kevin Waide at 2:49 PM No comments: